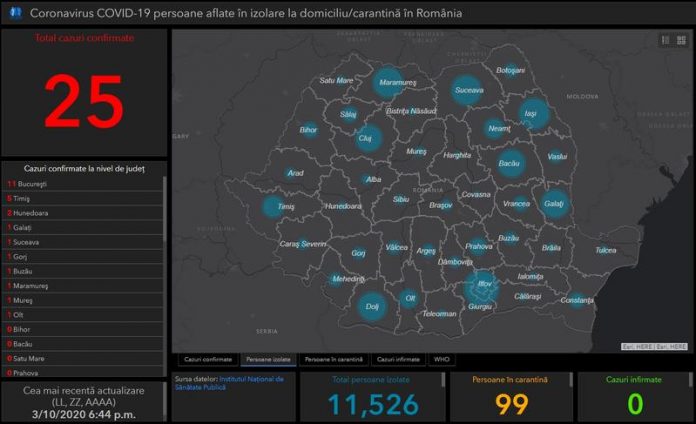 Romanian authorities said Saturday that 367 Romanians had tested positive for the novel coronavirus, 59 new infections since the previous day.

Seven Romanians who live abroad have died from the deadly disease, the Strategic Communication Group said. Six were in Italy and one in Spain. There have been no deaths in Romania.

There are about one million Romanians living in Italy and tens of thousands have returned in recent weeks to Romania creating tensions, as some Romanians believe they have lied to authorities about where they came from to avoid quarantine.

Authorities have charged or are investigating 117 people for concealing information or lying about the virus, such as not reporting coming into contact with an infected person or lying about visiting a high-risk country.

President Klaus Iohannis has appealed to Romanians living abroad to not return for Easter this year, as Romania ramps up efforts to stop the spread of the deadly virus.

Iohannis decreed a 30-day state of emergency on Monday to enable authorities to tackle the crisis. Shops, restaurants, schools have been closed, and mass gatherings and sporting events suspended.

Also Saturday, Romanian authorities repatriated 227 Romanian nationals from the Italian city of Turin on two charter flights. The government has suspended all commercial flights to and from Italy and Spain, the worst-hit countries by the disease.

The Strategic Communications Group said Romanian authorities were trying to help seasonal workers return home. Italy is in a lockdown and many workers on temporary contracts no longer have jobs.

Itay’s Civil Protection Agency on Friday said 4,032 had died from the virus, more than in China.. The total number of cases in Italy rose to 47,021.