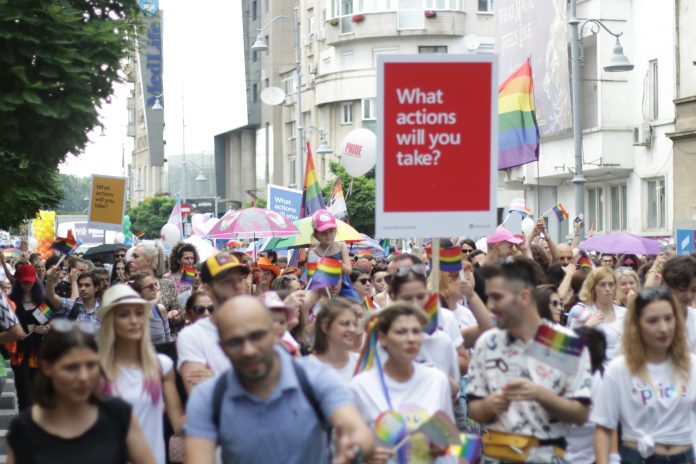 Following hours of tense negotiations, Bucharest City Hall on Monday did an about-face to allow Bucharest Pride to take place on its traditional route.

A same-sex advocacy group and the British Ambassador to Romania praised the decision to permit this weekend’s march on the historical Calea Victoriei in the heart of Bucharest.

The ambassador, Andrew Noble, said it was a sign of changing attitudes in the socially conservative European Union member state.

On Friday, the city hall was accused of trying to sideline the 15th edition of the gay pride march and move it to streets where there would be oncoming traffic.

Organizers said the city hall was trying to minimize the importance of the march, adding the  traffic would make it unsafe.

More than a dozen protested outside the city hall holding a giant rainbow flag. „They shouted „Homophobia at the city hall,” and „Freedom, not censorship.”

The three-hour event will take place on Saturday on Calea Victoriei. A maximum of 500 will be allowed to attend in line with pandemic restrictions on public gatherings.

Florin Buhuceanu, one of the founders of ACCEPT said he expected many more to turn up: “We can’t stop people coming. We will contest fines,” he said.

He said the British ambassador’s presence had been key to getting the location for Saturday’s march reverted to Calea Victoriei where it was held in 2018 and 2019.

This year’s event takes on added significance as it is 20 years since Romania decriminalized homosexuality as it prepared for EU membership.

Same-sex unions are not legally recognized and same-sex couples have no legal protection.

Ambassador Noble said Monday: “A country where minorities don’t have rights is a country full of fear.”

He said attitudes in Romania were gradually changing. A referendum in 2018 on the definition of marriage which would have led to added discrimination against same-sex couples failed to pass.

“I think the attitudes on LGBT questions  are much freer than anyone assumed,” Mr .Noble told Universul.net. A survey carried out this year by ACCEPT showed one-quarter of Romanians are in favor of same-sex marriage. A further 43% say there should be some form of legal protection for same-sex families, which currently doesn’t exist.

Despite the shift in progressive attitudes, the majority of Romanians still oppose legalizing gay unions. There are at least 21 same-sex couples suing Romania at European Court of Human Rights in Strasbourg, over their lack of legal protection.

However, the survey shows a shift in attitudes to same-sex couples and a growing belief that they should enjoy the same rights as heterosexual couples, the group which ordered the poll said.

Support for LGBT and LGBTI people was highest among younger people and those who know members of the gay community, lesbian, bisexual, and transgender individuals. It said the results of the last results showed “an upward trend in the acceptance of LGBTI people and same-sex couples” in Romania.