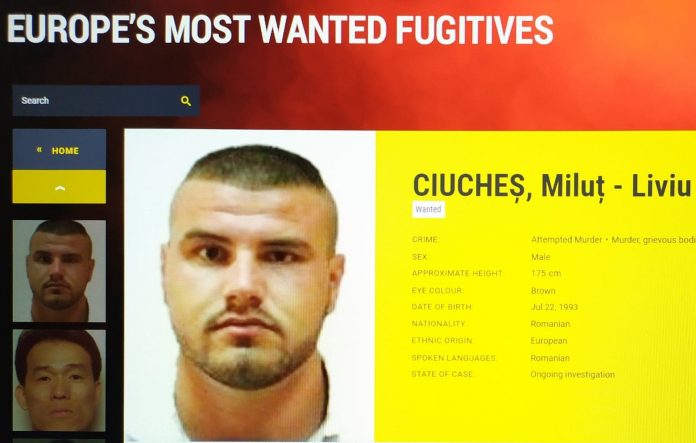 A Romanian man who is wanted in connection with attempted murder has found himself of ‘Europe’s Most Wanted Fugitives.’

The 28-year-old figures on the list of 62 other fugitives who are suspects or have been convicted for fraud, drugs trafficking, robbery and murder.

Romanian media reported that Ciucheş is the right-hand man of mobster Ioan ‘the Emperor’ Anton.

He is wanted by Irish authorities for being part of a criminal gang that committed crimes of an extremely violent nature in 2014. He has been on the run since then.

His mug shot on the eumostwanted.eu – „Most wanted list“ means he is one of the dangerous criminals on the loose in Europe.

Romanian police also have him on their ‘Most wanted list’ of Romanian police. An international arrest warrant has been issued for him.

From March to April 2014, while in Ireland, the fugitive together with other 11 individuals, organize a criminal group with the purpose of committing murder. They monitored and stalked people they considered to be part of rival criminal groups which they battered until one of the victims died, Europol said.

On the 10th of April 2014, the fugitive with the help of 10 accomplices, after breaking and entering the flat where one of the victims was living, battered him and stole several valuables from him. As a result of the battery the victim died three days later.

On the same occasion, with the help of the accomplices, he battered two other victims found in the flat, using metal bars, wooden bats and knives, the site said.

Virgil Buşă was killed in a dispute between two Romanian gangs operating prostitute rings in Ireland. He died in a hospital in Blanchardstown, a Dublin suburb.

Ciuches is described as being 1.75 m tall, having a round face and brown hair, the Romanian police site said.