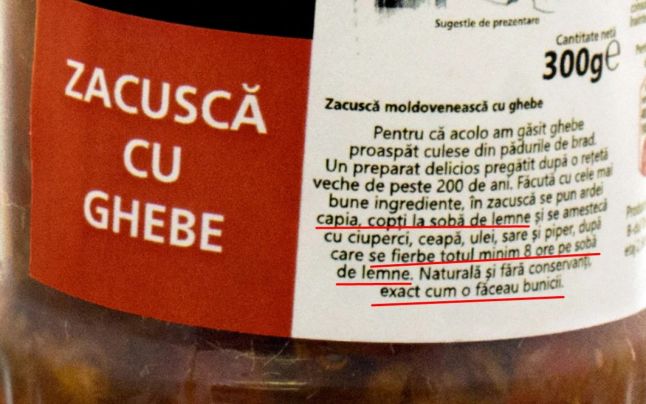 Zacusca is a traditional and popular vegetable spread or relish eaten in Romania and across the Balkans.

The relish, usually made from eggplant, mushroom or peppers, is homemade and eaten over the winter months when fresh vegetables are scarce.

However, in recent years, zacusca which wasn’t available in shops during the communist years, has been sold in supermarkets. Most consumers still associate the relish with slow cooking and traditional homemade methods.

That concept has landed a supermarket chain in Romania a fine for selling falsely representing the product.

A court in the southern Danube port of Giurgiu fined the Belgian-owned Mega Image chain for selling a mushroom-based relish that misrepresented the product for consumers,daily adevarul.ro reported.

The Consumer Protection Authority initially fined the company 7,000 lei for two different kinds of relish which it said were labelled in such a way that it made consumers think they were traditionally rather than industrially produced foodstuffs.

One jar of ”farmer’s relish” was described as a traditional peasant recipe, made from freshly selected vegetables for Moldovan relish  made from yellow mushrooms, with peppers roast in a wood oven for eight hours. The product was in fact industrially produced.

Mega Image, one of the biggest supermarket chains in Romania argued about the use of the adjective  “farmer’s” in another product saying it was the equivalent to “traditional” which referred to the way the vegetables were cut and their size.

Mega Image argued that the other preserve with yellow mushrooms wasn’t misrepresentative as it merely stated in was “traditional Moldovan,” a region in Romania.

The Giurgiu court fined the company over its description of the mushroom preserve saying the labeling was ‘deceptive,” but agreed with it over one of its products saying it hadn’t intended to deceive consumers.

“The company wanted to put out a romanticized image of farmer’s home who produce handmade products using traditional recipes with natural ingredients, an image which is much more attractive to the consumer than the impersonal and cold image of a factory involved in automated industrial process, focusing on quantity and then quality.”

Zacusca is of Slavic origin and means „appetizer” or „snack”. Elsewhere it is known as  ajvar or kyopolou in Bulgaria.