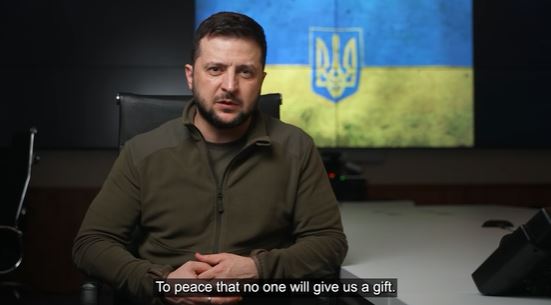 Senate speaker Florin Cîţu said the remote address to both chambers of parliament would start at 7pm this evening, Agerpres reported.

“I think we should all be honored,” he told reporters.

The Ukrainian president has waged an information war in Western capitals with the aim of getting public opinion on his side.

On Sunday, he offered a speech to the Grammy Awards which started:  „What’s more opposite to music? The war.”

„The silence of ruined cities and killed people. Our children drew swooping rockets, not shooting stars,” he said. „Over 400 children have been injured and 153 children died. And we will never see them drawing.”

He has also addressed parliaments in the UK, Italy, France, Germany, the US, Japan and Canada_ receiving standing ovations everywhere.

He speaks live by video link from besieged Kyiv, wearing a khaki-colored t-shirt and sporting several days of stubble. He sometimes signs off with a clenched fist salute.

Russia accused of ‘unspeakable horrors’ in Ukraine over killing of civilians in Bucha. Moldova declares day of mourning