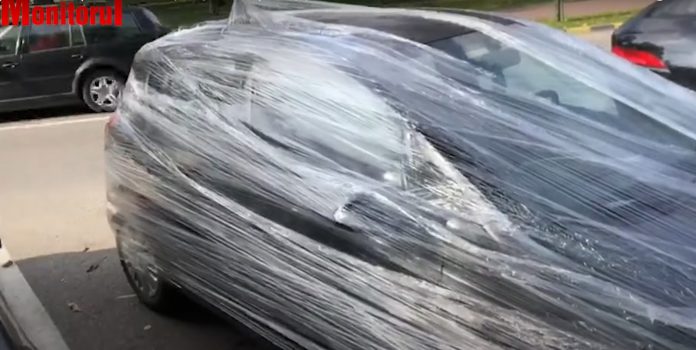 As far as poor parking goes in Romania, it wasn’t even that bad.

But when a motorist and three friends returned to their sloppily parked automobile in the northern city of Suceava, they found that somebody had wrapped it in clingfilm, an unorthodox way to send them a message.

There was even a note attached: a banner wrapped round the back of the car read “Park correctly.” There was another note written in pink letters stuck on to the plastic with the same message.

The Opel had been parked in between two other vehicles, but it was in a place where cars are not normally parked. One of its wheels had crossed into another parking space.

The four are filmed arriving back at the car, and not seeming too pleased, Monitorul de Suceava said.

The four took the clingfilm off the car, screwed it up in a ball and dumped it before driving off.

If they return, they may find themselves with a note reminding them of how to  dispose litter.

Romania is notorious for bad parking. Some motorists park their vehicles on the sidewalk, on pedestrian crossings, or block entrances to buildings.