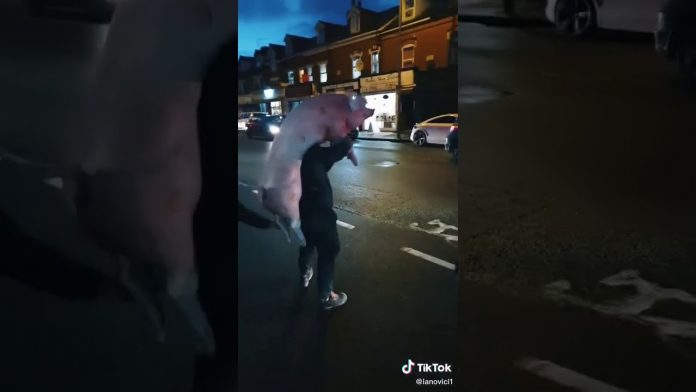 What would a Romanian Christmas be without a pig slaughter?

Along with family, friends and carols, the tradition is at the heart of Christmas even_ or especially_ when you are far from home.

Earlier this month, Romanians in London ‘treated’ locals to the aftermath of Yuletide ritual more commonly seen in villages and open spaces across Romania at this time of year.

They seemed to be proud that they’d managed to perform the ritual in the UK, home to half a million Romanians, and posted a film of the freshly slaughtered pig being hauled out of a car boot and carried over a man’s shoulders across a busy street,  Ziarul Adevărul reported.

“Come on lads with the pig,” a woman is heard saying in Romanian, amused by what she imagines is the reaction of passers-by seeing a dead pig hauled across the street. A child can be heard laughing in the background.

The scene was filmed on December 12 and has been posted on social media networks.

The publication noted it wasn’t the first time when Romanians have made a spectacle of themselves.

Romanians were involved in a street brawl in the central city of Sheffield in July that required the intervention of special forces.

Pig slaughter which involves the animal’s throat being slit was formally banned when Romania joined the European Union in 2007. EU rules require for the pig to be anesthetized first, but the tradition is still widespread.

Pork is a staple of Christmas feasts, either sausages, roast, minced with rice and wrapped in cabbage rolls known as ‘sarmale’ or in aspic which is called ‘racitura.’