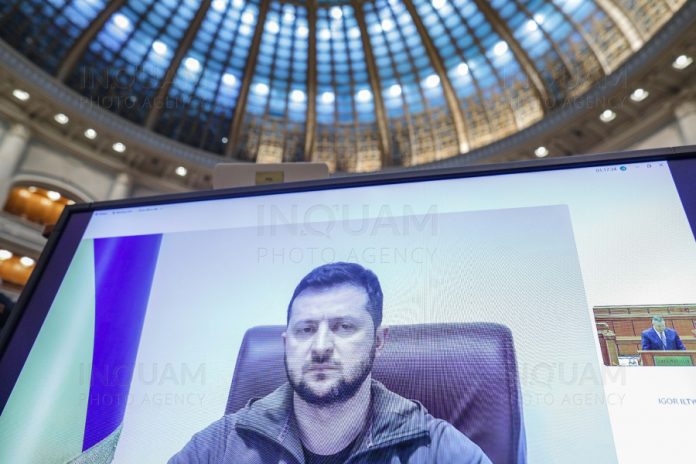 Ukrainian President Volodymyr Zelensky on Monday called on the West to unite to prevent a „genocide” by Russia in Europe, saying the continent’s security depended on the outcome of Moscow’s aggression against his country.

„Together we can stop those who want genocide in Europe,” President Zelensky said in a speech to the Romanian parliament, after showing images of bodies in civilian clothes littering the streets of Bucha.

His speech via video link was preceded by a moment of silence in memory of the victims of the war in Ukraine.

His appearance came several hours after he visited Bucha,  the scene of a massacre allegedly by Russians forces just outside Kyiv. Lawmakers gave him a standing ovation in a  joint sitting of parliament.

„The name of our city Bucha will remain in the history of the world, in the history of killing people. So far we know of over 300 tortured people, ordinary people, residents of an ordinary city. They had their hands tied behind their back and they were shot in the back of the neck or in the eyes „, Mr Zelensky  said.

Tanks crushed cars,  women and girls were raped and soldiers were tortured by Russian forces, he said.

Russia has denied the massacre and a Kremlin spokesman on Monday called the images ‘fake.’

But Mr Zelensky said that a Russian news agency had published an article justifying the genocide. “This is one piece of evidence against the Russians, „he said.

The Ukrainian leader who has addressed parliaments worldwide since Russia launched its invasion, compared the dictatorship of Russian President Vladimir Putin to Romanian dictator Nicolae Ceausescu who was executed during the 1989 revolution.

„The Romanian people rose up and defended themselves by overthrowing a flawed regime because it was the only way,” he said, comparing communist Romania to contemporary Russia.

„Dear Romanian people, together we must stop these flawed people who have become accustomed to not being punished, because they are allowed to get away with anything. (…) Ukraine is not Russia’s last target, the Republic of Moldova,” could be next.

He said that Romanian companies would be invited to take part in the post-war reconstruction of Ukraine and promised to improve relations with hundreds of thousands of ethnic Romanians.

„We want a dialogue with Romania to ensure the protection of our national minorities. Our future is together in a European family „, he added.

In opening remarks, the speakers of the two chambers, Florin Cîțu and Marcel Ciolacu, condemned Russia’s actions and announced that Romania would support the International Criminal Court’s investigation into the massacre.

The Ukrainian president said Russia had plans to occupy Odessa and from there to move to Moldova.

“It is fundamental to defend the independence of Moldova and this means security in the entire Danube region. The fate of the whole of Eastern Europe and the Black Sea is being decided on the territory of Ukraine,” he said.

He called on Romania to close its ports to Russian ships and stop the transit of goods to Russia.

The Bucha atrocities pushed the West into the danger zone. Now it’s time for Romania to tackle its Kremlin propagandists