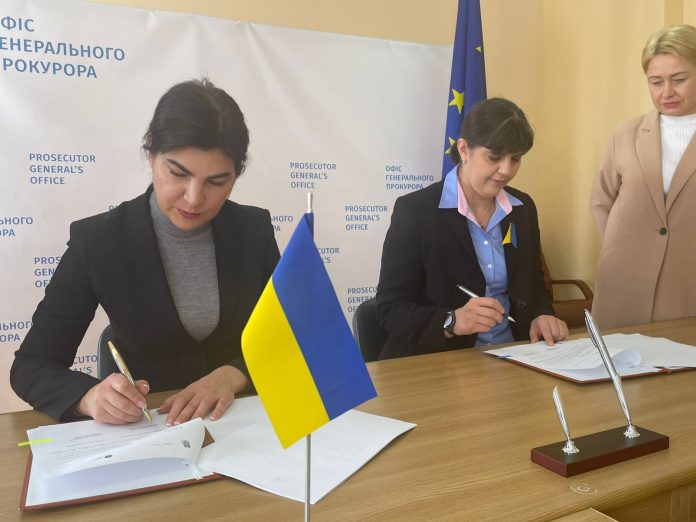 The European Chief Prosecutor Laura Kovesi traveled to Kyiv on Friday where she discussed the prosecution of war criminals and confiscating their assets. She praised Ukrainians for their courage they’d shown after Russia invaded which she said would serve them well when the war ends.

“Your investigations into war crimes and crimes against humanity committed in Ukraine will be essential in getting the wheels of international justice into motion as well as to allow the healing process of the Ukrainian and Russian nations to start,” a EPPO statement said.

Ukraine’s general prosecutor posted on Facebook.  „EU Chief Prosecutor Laura Kovesi has come to support us in Ukraine. She is the first European Union official to visit our state in this  difficult war. We discussed  the EU Prosecutor’s Office cooperating with the General Prosecutor’s Office to search, arrest and confiscate the assets of war criminals.”

The two sides signed a working arrangement to cooperate in protecting the financial interests of the EU and Ukraine, via “effective investigation and prosecution, and to bring to justice without undue delay all suspects or accused of crimes against the EU budget.”

Ms Kovesi was formerly Romania’s chief anti-corruption prosecutor where she gained a fearsome reputation for her relentless pursuit of senior politicians and public officials, many of whom who saw their careers cut short after she successfully prosecuted them for corruption offenses.

On Friday, she offered encouragement to Ukrainian colleagues. “The whole world is witnessing the suffering, despair and destruction that the war launched by the Russian Federation against Ukraine is inflicting on millions of your compatriots,” she said.

“We are humbled by your example, by the determination of the Ukrainian prosecution service to continue to work under siege, bombarded, on the verge of annihilation. We are convinced that your tenacity and courage will prove critically important once peace will return to Ukraine.”

She said the EPPO wanted to help Ukrainian officials prepare for eventual admission to the EU “with all the means at our disposal, within the limits of our mandate and expertise.”

In related news, former Bulgarian Prime Minister Boyko Borissov was arrested on Thursday in connection with 120 cases of misuse of EU funds. Several other members of his GERB party were also arrested.

The arrests came just a day after Ms Kövesi, visited Bulgaria to meet with Premier Kiril Petkov. “Nobody is above the law,” said Petkov in response to the arrests.