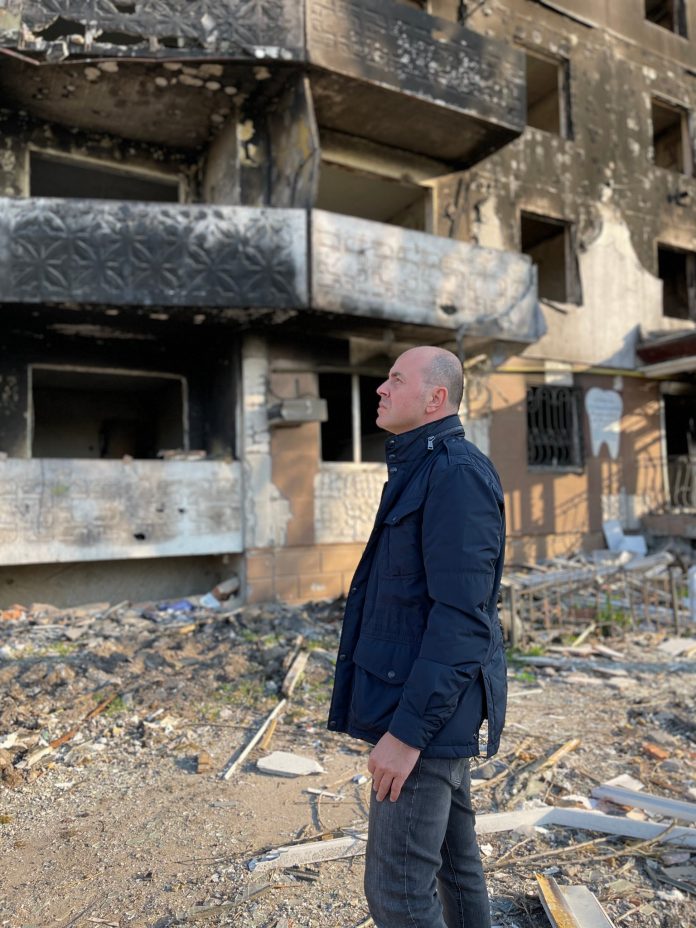 Alexandru Muraru, a Liberal lawmaker and historian, on Friday said he witnessed the extent of the destruction by the Russian army in Ukraine at  Bucha, Irpin, Borodianka, Hostomel.

“I have seen with my own eyes the mass graves, the huge destruction, hundreds of houses and blocks completely razed. I have seen the places of genocide that the Russian invaders transformed into places of terrible crime… The  so-called ‘second largest army of the world’ turned out to be a band of rapists and robbers, odious criminals who can no longer be considered human.”

“The Russian national guard, Chechen mercenaries, soldiers of the Russian Army have wiped out 80 years of civilization after World War II.”

He said surrounding areas of Kiev” look like come from World War II. The forests around Kiev look like  they did 80 years ago after the Nazi invasion. Everything is burned, destroyed, … They staged a systematic, planned and coordinated crime and wrought destruction. Their aim was to terrorize the population and then commit mass murder and take out critical infrastructure,” he wrote.

“The killings began on February 25, the day after the invasion. In early April, when Ukrainian forces liberated the surroundings of Kiev, these heinous crimes came to light. They changed the course of the war in Ukraine.”

“The tortures and assassinations of the Russian army strengthened the resolve of Western governments to arm Ukraine and reduced the possibility for a negotiated peace. settlement.”

He said that leaders from all over Europe „have come to  Bucha to see firsthand the devastation and murder…  Ukraine will fight to seek justice in Bucha and everywhere. This is Ukraine’s new covenant.”

“The Russian criminals took revenge on everything they found in their way because they realized they could not enter Kiev. The resistance and hostility of the Ukrainians led to the  Russians to implement their barbaric plan: the killing of adult men, torture, the rape of women in order to suppress resistance and achieve a collective nervous breakdown…”

The mayor of Borodyanka told me that all the infrastructure of the city was destroyed, almost all the apartment blocks were shelled and anyone who remained in the city when the Russians came has, if he or she is still alive, a trauma forever.

Some 400 Ukrainians were killed in Bucha, the first site to be identified in early March. The  bodies were later exhumed by prosecutors and coroners.

“Corpses tied with their hands behind their backs, shot in the head or legs, some with eyes gouged out or other horrific tortures. Some corpses were beheaded.

Many were kidnapped, put to dig individual graves or taken by the Russians for various operations behind the front.

“There are many cases, where, after the shelling,  people took shelter in basements, but the Russians armed with grenades and sub machine guns got in and liquidated them.”

“The Russians had lists; they mostly looked for men and members of the elite, such as local officials, activists or sometimes just men of military age. They went from house to house…. apartment to apartment.

Snipers stayed here for weeks, and when people went out to look for food, they were executed or caught immediately.

Survivors, officials and the military told us how the Russians were shooting in all directions, at any movement  on the street or anyone near a window.

“The battle to take over Kiev was a murder scene with torture, arson, rape.”

He said the Russian invasion’s “was a planned genocide to eliminate the Ukrainian nation” claiming  90% of victims were targeted killings.

local officials, activists or sometimes just men of military age. They went from house to house…. apartment by apartment.

Snipers stayed here for weeks, so that when people went out to look for food, they were  executed or immediately caught.

Survivors, officials and the military told us how the Russians were shooting in all directions, at any  movement  on the street or anyone standing near a window.

„The battle to take Kiev turned into an abominable murder scene; there was torture, arson, rape.”

He said the Russian invasion’s “was a planned genocide to eliminate the Ukrainian nation” claiming 90% of victims were targeted killings.

Russia accused of ‘unspeakable horrors’ in Ukraine over killing of civilians in Bucha. Moldova declares day of mourning