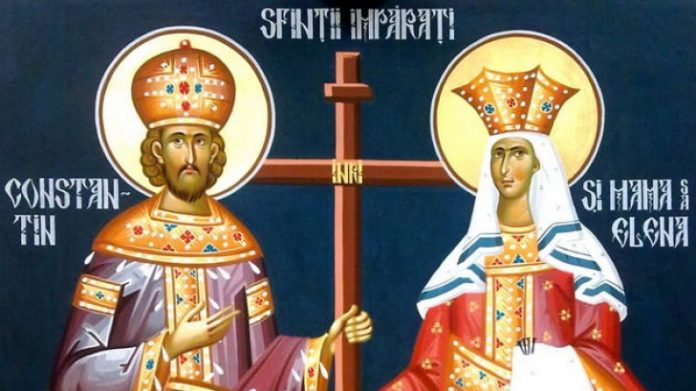 Almost 1.8 million Romanians who are named after Orthodox saints Constantine and Helen on Friday celebrated their name day.

The mother and son are the founders of the early Christian church and considered “equal to the apostles” of Jesus Christ. They are celebrated on May 21 in Orthodox countries including Greece, Russia, Bulgaria and Romania.

According to Orthodox tradition, nearly every day of the year is dedicated to some Christian saint or martyr. When someone in Romania or another Orthodox country is named after one of these saints, that saint’s celebration day becomes their “name day” and is celebrated much like their actual birthday.

Constantine was the first Roman emperor to convert to Christianity and under his rule, Christianity really took root.

In 325, he organized the First Council of Nicaea where he addressed the assembly personally. The council produced the first version of the statement of Christian belief known as the Nicene Creed which is recited during Christian worship.

It is the custom in an Orthodox country to send greetings to someone on their name day. There are 1.13 million girls and women who are named Elena in Romania or derivates of the name, while about 650,000 boys and men are called Constantin. Costel and other versions of the name, according to interior ministry figures.

Constantine was proclaimed successor to his throne when his father died in 306. Six years later, he learned that two rivals had joined forces against him. So he marched into Italy, where he saw a radiant pillar in the form of a cross with the words: „By this shalt thou conquer.”

Shortly after that, Jesus Christ appeared to him in a dream and told Constantine about the cross and its significance. After the dream, Constantine ordered that his victory banner be inscribed with the Holy Cross and bear the name of Jesus Christ.

Helen, who was of humble birth, traveled to Jerusalem after her son won the battle and is credited with finding the True Cross.

Legend says that she was tipped off to the cross’s existence because she found the aromatic herb, basil, growing in the shape of a cross. Every year, on September 14th, Orthodox Christians celebrate the Elevation of the Cross by taking home some fresh basil.

After that, she erected churches in Jerusalem at the sites of the Crucifixion and Resurrection, in Bethlehem where Christ was born and at the Mount of Olives whence He ascended into Heaven, and also in  Cyprus. Her image appeared on gold coins.

The Catholic Church and Anglican Communion also revere Helen and Constantine as  saints.