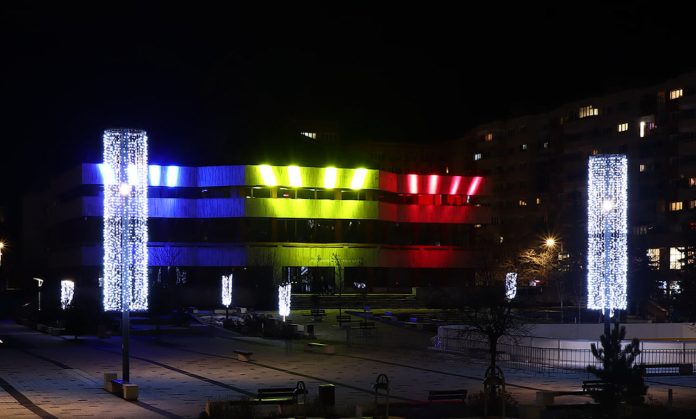 An ethnic Hungarian town in the heart of Romania has celebrated Romania’s national day for the first time by lighting up a municipal building in the colors of the Romanian flag.

Mayor of Miercurea Ciuc Attila Korodi on Thursday called the gesture “a sign of normality.”

Romania celebrates National Union Day on December 1 to mark the day when the Romanian provinces of Moldavia and Wallachia reunited with Transylvania which had been part of the Austro-Hungarian empire.

Ethnic Hungarians usually do not celebrate the day as it is a reminder of the territory they lost after World War I which saw the end of the Austro-Hungarian Empire.

Romania has a sizeable ethnic Hungarian community  of 1.4 million which mainly lives in the northwest Hungarian region.

Miercurea Ciuc mayor Korodi said the celebration of Romania’s national day in the town  was a “premiere,” Agerpres reported.

Miercurea Ciuc is the county town of Harghita and is one of the coldest places in Romania. About 82% of the town of 40,000 are ethnic Hungarians.

„It’s a real joy to feel that …. the paths of co-existence have led to normality. I have always said that this place has the good fortune of a united community. It’s a blessed place for Romanians and Hungarians… of the right people who understand that we can live and celebrate together, different as we are. Happy Birthday, Romania!”, Marius Ţepeluş said.

The sight of the Cultural Center lit up in the red, blue and yellow of the Romanian flag on December 1 was a surprise for many with no prior announcement.

For the first time, the town was decorated with large Romanian flags. The previous mayor rarely participated in national day events.

However, municipal buildings were illuminated with the Hungarian flag on October 23 to mark the 1956 uprising.

Hungary to build more than 100 kindergartens, repair 100s of old ones in Romania’s Transylvania region